Military Association of Atheists and Freethinkers 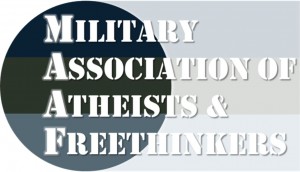 Nontheistic members of the American military are currently without equal support from their chaplains. The Military Association of Atheists and Freethinkers are working to educate currently-serving religious chaplains on how to support atheists and humanists, and to endorse humanist chaplain candidates for military service.

The Military Association of Atheists & Freethinkers is headed by Jason Torpy, a prior Army Captain, West Point graduate, and Iraq war veteran who uses knowledge of military culture and regulations to advocate for chaplaincy reform. More importantly, MAAF represents thousands of members and over 10,000 self-identified atheists in the military who can benefit from chaplaincy support.

The military chaplaincy is distinguished by the large amount of secular duties chaplains are expected to provide. Advising the chain of command on morale and welfare, preparing religious support plans for all service members even those of other faiths, providing secular coaching and counseling services, and advising the command on legal issues are all within the responsibilities of a military chaplain. This is over and above the physical and mission requirements for all military officers. Military chaplains attend to religious operations, morale support, and ethical advisement, but the religious faith of the chaplain often takes a back seat in these matters. A chaplain’s personal beliefs and clergy credentials should only come to the forefront in designated religious services or when a service member requests sectarian counseling from that chaplain’s tradition.

Humanist chaplaincies serve the same roles as their religious counterparts. Aside from the secular services already noted, they provide their humanist-specific counseling, facilitation, and ceremonial support. Humanist chaplains can connect with and support humanist military personnel by drawing from their common beliefs about the universe, ethics, and meaning. This is a connection that cannot happen when the chaplain and service member have fundamental philosophical disagreements. Similarly, a chaplain not endorsed as a humanist “clergy” person or credentialed leader could not be put forth by the military as an authentic representation of humanism. While we as humanists generally reject authority and absolute truths, we certainly recognize the importance of education, experience, and the recognition of peers. These qualifications provide for a chaplain who can authentically represent humanism in addition to the other secular services they can provide.

Some argue against the very idea of military officers (government officials) with official ties to religion, and that any needed religious support could be provided by contracted personnel (just as maintenance, food service, and even security forces currently contract in warzones). Alternatively, some argue that the chaplaincy is primarily a secular officer corps and so could be better served by credentialed counselors or general military officers who don’t have a faith endorsement. Such a corps would be filled with “secular chaplains” or counselors with no specific religious endorsement or credentialing. These arguments have some merit but are not within the scope of this program. The program puts forth specific chaplain personnel with humanist endorsements.

The Military Association of Atheists & Freethinkers coordinates with the Humanist Society to provide a IRS-recognized “church” endorsement for military chaplains. Military regulations require a “post-baccalaureate graduate degree in the field of theological or related studies” with no fewer than 72 semester hours, and at least half of the credits are in religion-relates studies or the “foundational writings from the applicant’s religious tradition.” The candidate is also expected to have at least 2 years of leadership experience “compatible with … their respective religious organization and relevant to the settings of the military chaplaincy.” The ideal candidate would have certification from the Association of Professional Chaplains or a similar endorsing body. These provide for a general overview and the military may provide waivers or exceptions for a qualified candidate. MAAF is actively seeking candidates, including those who may require one or more years to become fully qualified.

The military also provides for lay leaders which are akin to an informal chaplaincy. Military personnel may be recognized by a humanist endorsing body (MAAF/Humanist Society) as qualified to facilitate humanist meetings from a lay perspective. There are no educational or experiential requirements aside from those imposed by the humanist endorsing body. These lay leaders provide a way to recognize a leader in the local humanist community who can fill in when assigned chaplains do not include a humanist. This is commonly used for Wiccan, Jewish, Buddhist, and other minority religious traditions.